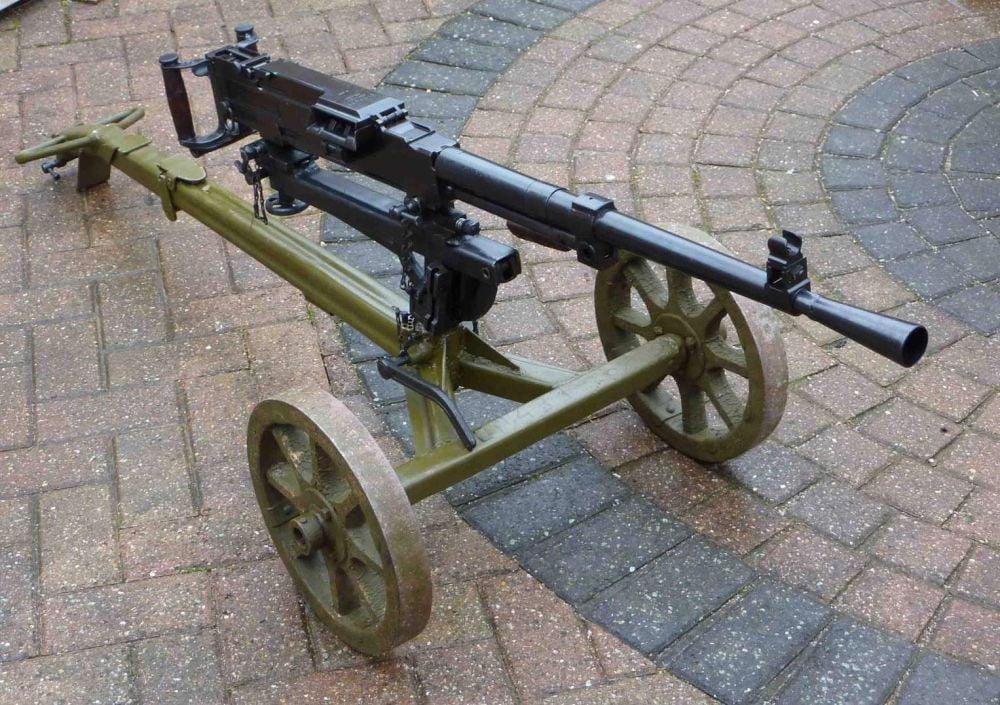 830 in stock.
0 in your basket
View Basket Checkout

The SG-43 Goryunov was a Soviet medium machine gun (about the equivalent of the AmericanM1919 Browning machine gun) that was introduced during the Second World War and is chambered for the 7.62×54mmR cartridge. It was introduced in 1943 as replacement for the olderM1910 Maxim machine guns and was mounted on wheeled mounts, tripods and armored vehicles.

The SG-43 used a tilting breechblock, moving sideways and locking into the side of the receiver. The feed is not straightforward, as the gun fires the 7.62×54mmR round, and this has to be withdrawn rearwards from the belt before ramming into the breech. The reciprocating motion is achieved by using two claws to pull the round from the belt, and then an arm pushes the round into the cartridge guide ready for the bolt to carry it to the breech. Despite this complication, the SG-43 was remarkably reliable and feed jams were apparently few.

The barrel is air-cooled and massively dense, contributing to a fairly high overall weight. The bore is chromium-plated and able to withstand continuous fire for long periods. The barrel can also be easily changed by releasing a simple lock, and the carrying handle allows a hot barrel to be lifted clear without difficulty. The WWII version of the gun had a smooth outline to the barrel, and thecocking handle was under the receiver, with no dust covers to the feed and ejection ports.

After the end of World War II the SG-43 was improved and renamed SGM ("M" for modernized); dust covers and a new barrel lock were fitted, and a splined barrel was fitted to improve cooling.[3]A tank mounted variant was also developed under the designation SGMT.

The SG-43/SGM was widely exported and also licensed for construction in several countries. It was manufactured in the People's Republic of China as Type 53 and respectively as Type 57 heavy machine gun, but also in Czechoslovakia (as Vz 43) and Poland (as Wz 43).[4]

In addition to World War II, it saw service in the Korean War with the Communist North Koreanand Chinese forces. In Soviet service, the Goryunov, together with the RP-46, was replaced in the 1960s by the PK machine gun due to the switch in Soviet tactical doctrine to the general-purpose machine gun concept, rendering the gun effectively obsolete.